Besides the main functionality, GemPy is the basis for additional projects:

New developments in the field of augmented reality, i.e. the superimposition of real and digital objects, offer interesting and diverse possibilities that have hardly been exploited to date. The aim of the project is therefore the development and realization of an augmented reality sandbox for interaction with geoscientific data and models. In this project, methods are to be developed to project geoscientific data (such as the outcrop of a geological layer surface or geophysical measurement data) onto real surfaces.

The AR Sandbox is based on a container filled with sand, the surface of which can be shaped as required. The topography of the sand surface is continuously scanned by a 3D sensor and a camera. In the computer the scanned surface is now blended with a digital geological 3D model (or other data) in real time and an image is calculated, which is projected onto the sand surface by means of a projector. This results in an interactive model with which the user can interact in an intuitive way and which visualizes and comprehend complex three-dimensional facts in an accessible way.

In addition to applications in teaching and research, this development offers great potential as an interactive exhibit with high outreach for the geosciences thanks to its intuitive opeÍÍration. The finished sandbox can be used in numerous lectures and public events, but is mainly used as an interface to GemPy software and for rapid prototyping of implicit geological models. 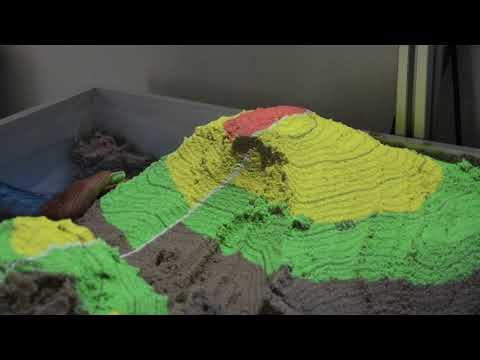 We support this effort here with a full 3-D geomodeling exercise on the basis of the excellent possibilities offered by open global data sets, implemented in GoogleEarth, and dedicated geoscientific open-source software and motivate the use of 3-D geomodeling to address specific geological questions. Initial steps include the selection of relevant geological surfaces in GoogleEarth and the analysis of determined orientation values for a selected region This information is subsequently used to construct a full 3-D geological model with a state-of-the-art interpolation algorithm. Fi- nally, the generated model is intersected with a digital elevation model to obtain a geological map, which can then be reimported into GoogleEarth.