Export a geological model from GemPy to use in MOOSE¶

The procedure of generating a geological model is presented in detail in Chapter 1-1 of the GemPy tutorials, so it will only be briefly presented here

present the units and series


combine units in series and make two series, as the fault needs its own


check whether series were assigned correctly

After loading in the data, we set it up for interpolation and compute the model.

have a look at the data and computed model 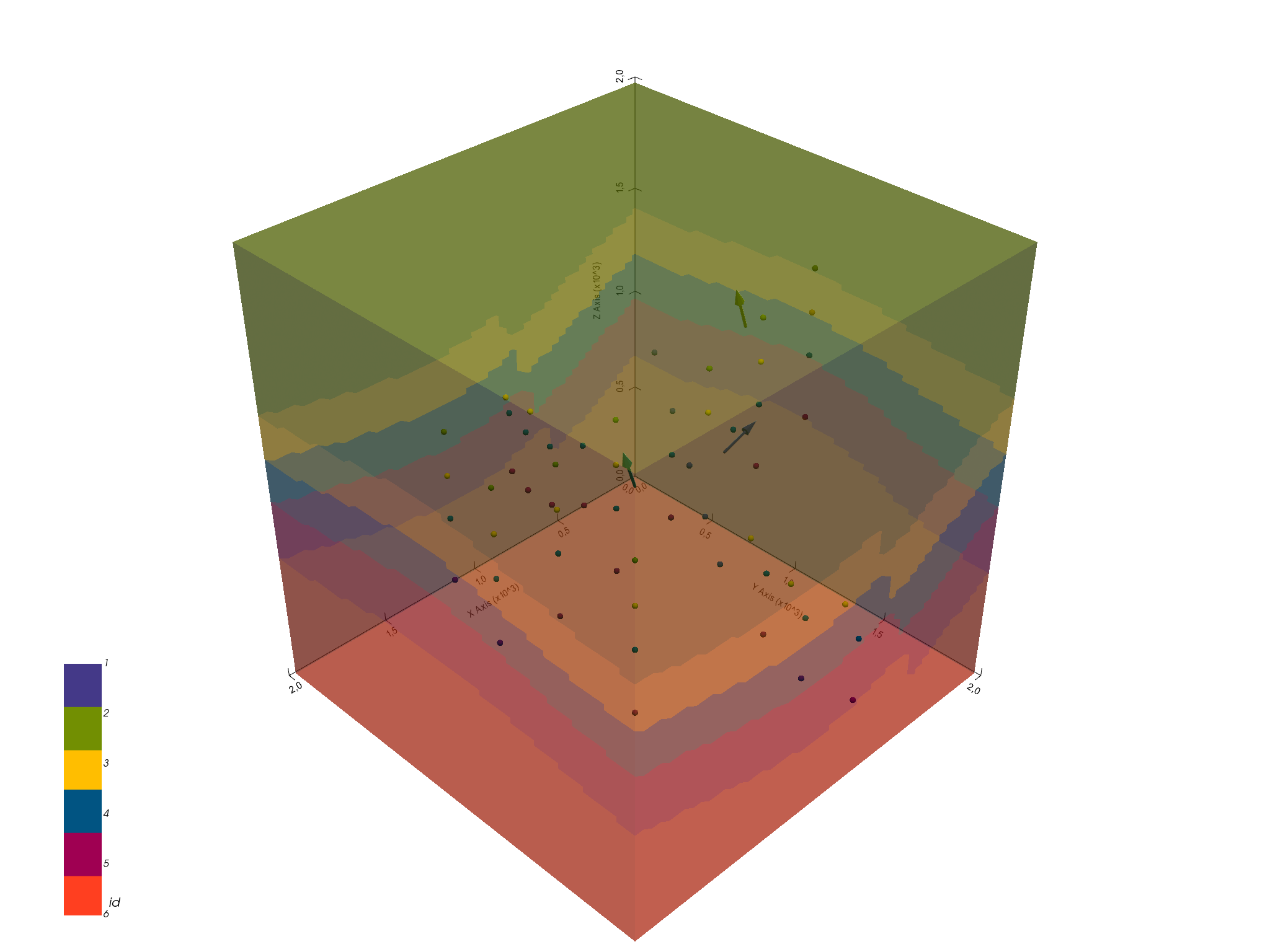 Exporting the Model to MOOSE¶

The voxel-model above already is the same as a model discretized in a hexahedral grid, so my immediately be used as input in a simulation tool, e.g. MOOSE. For this, we need to access to the unit IDs assigned to each voxel in GemPy. The array containing these IDs is called lith_block.

This array has the shape of (x,) and would be immediately useful, if GemPy and the chosen simulation code would populate a grid in the same way. Of course, however, that is not the case. This is why we have to restructure the lith_block array, so it can be read correctly by MOOSE.

These two parameters are important to, a) restructure lith_block, and b) write the input file for MOOSE correctly. For a), we need to reshape lith_block again to its three dimensions and re-flatten it in a MOOSE-conform way.

The importance of nx, ny, nz is apparent from the cell above. But what about xmin, …, zmax?
A MOOSE input-file for mesh generation has the following syntax:

So these parameters are required inputs in the [MeshGenerators] object in the MOOSE input file. GemPy has a method to directly create such an input file, stored in gempy.utils.export.py.

The following cell shows how to call the method:

This method automatically stores a file geo_model_units_moose_input.i at the specified path. Either this input file could be extended with parameters to directly run a simulation, or it is used just for creating a mesh. In the latter case, the next step would be, to run the compiled MOOSE executable witch the optional flag --mesh-only.

E.g. with using the PorousFlow module:

How to compile MOOSE is described in their documentation.

The now generated mesh with the name geo_model_units_moose_input_in.e can be used as input for another MOOSE input file, which contains the main simulation parameters. To call the file with the grid, the following part has to be added in the MOOSE simulation input file:

The final output of the simulation may also be such an .e, which can, for instance, be opened with paraview. A simulated temperature field (purely conductive) of the created model would look like this: